We would like to propose that we adjust the Tao Voting app to use these Parameters:

The General Magic Team adjusted their work for the TEC to make this custom BrightDAO Configuration Dashboard . Which Adam, Phil, Bitsikka, CurlyBracketEffect, Ashraf, TripleSpeeder, Serge and a few others who joined in used to take a deep dive into Tao Voting and Conviction Voting .

They worked together, especially with Adam, Phil, Bitsikka & TripleSpeeder to conclude on this new set of Tao Voting Parameters: 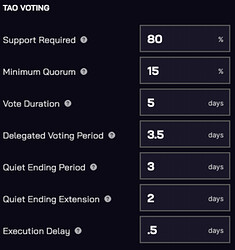 Tao Voting is the decision making process that governs proposals to make changes to the BrightDAO. It can change garden parameters, it can send the funds from the common pool anywhere & more! It is basically god-mode for BrightDAO. Votes that come out of Tao Voting can have a HUGE impact on BrightDAO, so in general, we decided to make it harder to pass proposals.

Here is the rational for each parameter:

Support Required is the percentage of yes votes of the total votes for that proposal required to pass a proposal; represents the level of consensus required to pass a proposal. Another way to think about it in the context of Tao Voting in a Boboli Garden is, what percentage of active token holders should be able to Veto any changes to the BrightDAO’s smart contract system. In that context, we concluded that it should be hard to change things and controversial decisions around on-chain changes should be able to be Veto’d if 20% of the active voting community disagree with it. Also, given the context of DAO votes with transparent votes where real time outcomes are visible, it is clear that votes often have very high positive outcomes, passing with 95%+ support often, so it is unlikely to create an issue for votes that should pass.

Minimum Quorum is the percentage of YES votes unlike most DAO Quorums, Tao voting avoids weird situations that disincentivize no votes, by only counting Yes votes for quorum. And in this case, as in all cases with Tao Voting in a Boboli garden the only tokens that are relevant are the wrapped $Bright tokens. The $BRIGHT token supply is irrelevant for the calculation of Minimum Quorum. In this context, given that only $gBRIGHT is what is relevant, you can see that by the holdings there are 2 token holders with over 10% of the holdings and over 10 token holders with over 2% of the tokens, and the majority are active in governance, so it would make sense to have a higher quorum than is generally used in the DAO space. So we went with 15%.

Vote Duration is the minimum amount of time voters will have to vote on a proposal. For non-controversial proposals we wanted to speed the process up and we thought 5 days would be enough time to spread the word about a vote, knowing that if it is controversial, it can be extended by the Quiet Ending Extension (QEE).

All that said we chose to have a Quiet Ending Period of 3 days so that if there is any sort of controversy it will be more likely to trigger the Quiet Ending Extension which we set at 2 days so that would make controversial decisions take a full week. It’s pretty unlikely that there is a second extension but if there was, then it would take 9 days. This all just felt “right” after our discussions.

The Execution Delay is the minimum amount of time after a vote passes for it to be executed. This gives people time to sell their tokens if they don’t like the result, before the result can be executed. We chose to minimize this to 12 hours. This means that a vote can be created and executed as fast as 5.5 days later.

Yes! Tao Voting includes Delegation! While this feature has not been overly utilized in the Gardens community, it is there so we should prepare for it. Delegation only applies to decision votes via Tao Voting. Conviction Voting does not have delegation, this is probably why delegation hasn’t been more of a thing.

Delegation in Tao Voting is really cool, unlike delegation in Snapshot DAOs, if you disagree with your delegate, you can change how your tokens are counted! For delegates to signal for their #coinstituents, they have to vote during the Delegated Voting Period. If they vote after, their voting power only consists of their own tokens and the tokens of their coinstituents tokens will not be applied. We chose to make the Delegated Voting Period 3.5 days so that the Delegates have over 3 days to vote and the #coinstituents have over a day to see how their delegate voted and vote themselves if their delegate disagrees.

Given that the Quiet Ending Period is 3 days that means that if the delegates have a controversial vote, they can trigger the Quiet Ending Extension and if that happens, #coinstituens would have 1.5 days + 2 more days to vote to change how their tokens are counted.

Sorry this took so long to get out!

I want to personally apologize for the delay in writing this post. I had hoped to get it out before ETHdenver and when I missed that deadline, I had a month of IRL events preventing me from prioritizing this :-/

I hope you enjoyed this breakdown of Tao Voting and the thought process that went into proposing these parameters. Please comment below! We will leave this post up for 5 days of advice process before creating the vote to propose to change them!

The vote is up to change the Tao Voting Parameters!

Based on the parameters outlined:

I created the vote using this EVMcrispr script:

One special note that you will see that on the Gardens UI it rounded up the Delegated Voting Period from 3.5 to 4 but it is actually 3.5 days as you can see by the amount of seconds indicated in changeDelegatedVotingPeriod.