We propose to write a smart contract that can be attached to any AragonOS DAO (including Gardens) to prevent DAO members from performing certain actions unless they are validated with BrightId.

The initial use case is to limit the creation of decision and funding proposals for the BrightId Garden. Only verified accounts will be able to create these sorts of proposals.

The work will consist of three parts:

This proposal can be seen as a step further towards a closer integration of BrightId and Gardens (and Aragon DAOs in general).

The scope of this funding proposal is to prevent non-verified community members from creating DAO proposals. This is not, in itself, a particularly special thing. But it lays the ground work for future applications that do more with the identity constraints that BrightId enables

For example, it opens the door to the implementation of apps such as Quadratic Voting and/or Quadratic Conviction Voting (which could be done with a “Quadratic” Voting Aggregator). If this proposal is successful, we could study the feasibility of such a thing (we believe this would be extremely useful for the broader Aragon ecosystem).

This solution will also implement the new ACL oracle interface required by Aragon Govern, so it could also be used to prevent unverified unverified members from creating votes in the Aragon Network DAO - assuming BrightId is eventually selected as their decentralized identity solution.

We think we can have this ready in two weeks (after the vote is executed).

Skills and previous experience in related or similar work:

More detailed description of how funds will be handled and used:
Some of the funds will be transferred to the people who works on the proposal (listed above), and the remaining will be used to support other endeavors within the Gardens project.

EDIT: We clarified some parts of the proposal. Praise to @sacha for his thorough proof-reading

The proposal is now live on BrightId Garden.

Oh wow, this was fast. We are going to start working this week on the smart contract and deployment script. Expect news soon!

This will be awesome, looking forward to the results! 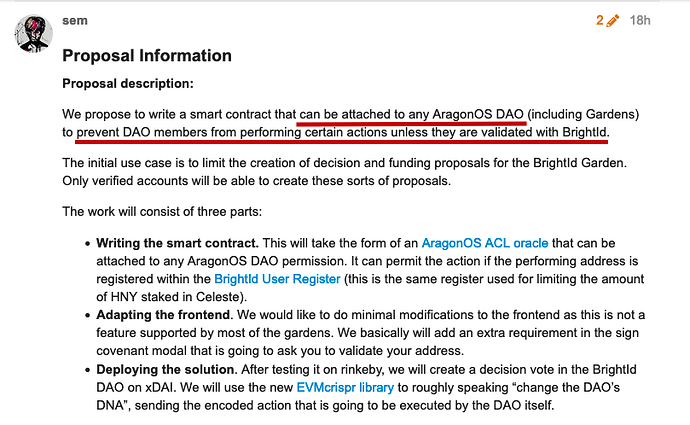 The end result will be a smart contract that can be attached to any @AragonProject DAO (including @gardensdao's). This smart contract has the ability to prevent DAO members from performing certain actions unless they are BrightID verified.

We’d like to show our progress in this proposal, and which are the blockers we have found (it’s going to take a bit more of time, sorry folks).

This is not a lot of work, but we will need some more time to work on this.

Btw, congratulations to the BrightId community for having been selected to be the identity solution for the Aragon Network DAO.

Please tell us if doing this project we can assist you in some way to integrate with Govern. The gatekeeper contract includes the willPerform used as Aragon Govern ACL oracle. Is it useful in some way for the case for the integration you are working on?

Additional features that could be useful to AN DAO and other DAOs:

Awesome proposal! let me know if you need any support from the Aragon team